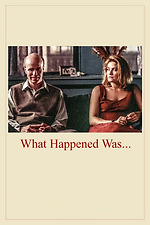 Written for this week's edition of www.cinefile.info/:

Filmmakers had drawn on stage plays for inspiration for as long as movies have existed, but the success of films like HOUSE OF GAMES and SWIMMING TO CAMBODIA (both 1987) signaled the rise of a particular kind of theatrical cinema that would remain in vogue in the U.S. for at least a decade. In their 1990s work, writer-directors Whit Stillman, Hal Hartley, and Neil LaBute (to name some of the most popular of this trend) foregrounded language over mise-en-scene—or, more appropriately, they made language part of the mise-en-scene, with the visual style and even the arrangement of physical space seeming to grow out of how the characters talked. WHAT HAPPENED WAS…, the first feature written and directed by character actor Tom Noonan (who adapted his own stage play), certainly belongs to this wave of American indie cinema; at the same time, its most likely theatrical reference points—the quasi-absurdist dramas of Harold Pinter and Edward Albee—come from three or four decades earlier. Like certain Pinter and Albee plays, WHAT HAPPENED WAS… teeters at the edge of realism; the film is exacting in its depiction of some things (middle-class banality, certain ways of speech), but eerily vague in other areas. It’s often unclear whether the characters are lying or telling the truth; to further complicate matters, it’s often unclear if the characters know the difference themselves. The film unfolds more or less in real time as two single, middle-aged co-workers, Michael (Noonan) and Jackie (Karen Sillas), have dinner at the latter’s apartment. What begins as a portrait of urban lonelyhearts mutates into something richer and stranger, as the characters get lost in the stories they tell to each other and themselves. WHAT HAPPENED WAS… displays a lot of visual invention for a movie that takes place in a single apartment; Noonan executes deft camera movements, stark lighting, and a snappy montage that respects the rhythm of the dialogue. Still, it’s the film’s tone that leaves the most lasting impression. Noonan has always been a distinctive onscreen presence (as anyone who’s seen MANHUNTER can attest), his soft voice and lanky gait suggesting a looming force that’s too close for comfort. WHAT HAPPENED WAS… advances a worldview in keeping with that presence.

The Picture of Dorian Gray