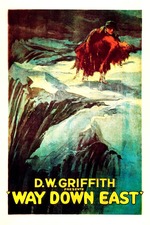 I'd only ever seen the famous ice floe scene of WAY DOWN EAST, which, however brilliantly executed, fails to communicate the emotional range of the whole movie. There's one extraordinary scene where Griffith presents Lillian Gish's character at the height of her suffering; total darkness surrounds her, making her seem literally isolated in her emotional pain. Then there's the passage detailing Gish's seduction by the villainous cad Lennox, which conveys a certain exuberance in spite of what's to follow. And the early scenes of Part II, set during Gish's rejuvenation in a Maine farm town after the death of her illegitimate baby, are tender and optimistic, speaking to our ability to rewrite our lives. Despite the thorough Americanness of its subject matter, WAY DOWN EAST feels somewhat like a Bollywood entertainment in how it uses melodrama to encompass virtually every popular genre.

Thanks to the lively genre-hopping and the emotionally resonant performances by Gish, Richard Barthelmess, and others, the film doesn't feel bound by the confining Victorian moralism it purports to endorse. There's such vitality to the characterizations of Griffith's best work; the people of WAY DOWN EAST, BROKEN BLOSSOMS, and TRUE HEART SUSIE transcend their melodramatic function and communicate genuine passion.