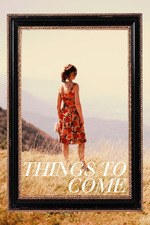 I think I underrated this movie when it first came out. After Mia Hansen-Løve's preceding three features, which shifted unpredictably between characters or took a novel approach to handling large stretches of time, THINGS TO COME seemed less ambitious and more straightforward. I realize now that I was undervaluing the film's inspired editing, which develops ideas that Hansen-Løve had introduced in FATHER OF MY CHILDREN, GOODBYE FIRST LOVE, and EDEN. As the director stated in a recent Criterion Channel interview, she and editor Marion Monnier construct scenes so they feel as though they've started after the principal action has begun and ended before it's been resolved. The intent, she explained, is to re-create the flow of life, rather than the flow of films.

This approach to scene construction reminds me of Maurice Pialat's mission to edit out every detail that didn't feel "true," which is another way of saying he built scenes out of the most vivid or emotionally precise details. As Hansen-Løve achieves a similar effect in her work, she may be Pialat's heir.

It's impressive that THINGS TO COME achieves such a mellifluous flow despite being made up of narrative starts and stops. This cleverly reflects how Isabelle Huppert's character (whom Hansen-Løve based on her own mother) coolly weathers one crisis after another while rarely ever seeming to fret.