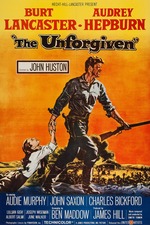 Burt Lancaster produced and starred in at least a half-dozen revisionist westerns over the course of his career, which makes me wonder about the roots of his skepticism regarding the western. What drove Lancaster to deliver critiques of this genre again and again, apart from the obvious disgust at the false myths about American imperialism that the western helped propagate? In any case, Lancaster and the other producers of this film were more interested in making a hit than delivering a message; it was John Huston who wanted to develop the theme of anti-racism. I presume Huston wasn't happy with the compromises he made with Lancaster and company, because he would go on to call this his worst film.

I may prefer the revisionist westerns Lancaster made with Robert Aldrich, but THE UNFORGIVEN is far from worthless. Huston creates some dynamic widescreen compositions, Lillian Gish is fantastic as Lancaster's mother, and the scenes of violent persecution on the frontier are memorably brutal.

There's no one thread, formal or thematic, that connects Huston's diverse body of work, although he was often drawn to subjects of failure and deterioration. In THE UNFORGIVEN, the entire family unit deteriorates as a result of prejudice and paranoia.

Let There Be Light