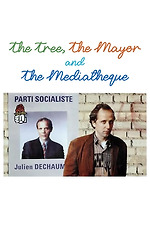 The Tree, the Mayor and the Mediatheque

The Tree, the Mayor and the Mediatheque 1993

This is one of the only Eric Rohmer films (if not the only one) to acknowledge contemporary politics, and that makes it stand out in the director's filmography. The world of politics seems too immediate and shifting to appeal to Rohmer, who always looked to topics that bridged people of the past, present, and future. Rohmer's characters worry about falling and staying in love, about faith, about the role chance plays in shaping their lives. The knowing timelessness of the films reflects a philosophical sensibility.

That sensibility is still present in THE TREE, THE MAYOR, AND THE MEDIATHEQUE, which frames a conflict between left and right as a debate between values of modernity and tradition. The film gives us an idealized version of the political process where everyone acts respectfully and supports their position with well-reasoned arguments. It's not unlike Rohmer's version of the game of love.

The film opens with Fabrice Luchini teaching a grammar lesson to grade-school students, which I think is meant to represent the joy (or at least the handsome functionality) of order in everyday affairs. The scene also suggests that Rohmer is tipping the scales of the film's debate in favor of tradition, but the surprisingly goofy ending shows that he's not afraid to mess around with narrative form.

As in a number of Rohmer films, the bright 16-millimeter cinematography gives the images the quality of Impressionist sketches.