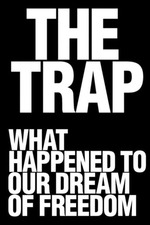 The Trap: What Happened to Our Dream of…

The Trap: What Happened to Our Dream of Freedom 2007

When a friend told me the other day that Adam Curtis would be premiering a new work soon, I felt a great urge to revisit one of his series. I settled on THE TRAP because I'd only seen it once and not since around the time it first aired on TV. I remember feeling underwhelmed by the series on first viewing; too many of the ideas felt recycled from Curtis' previous series, THE POWER OF NIGHTMARES, and the cynical take on contemporary psychiatry struck me as speciously reasoned. A dozen years later, my reservations about THE TRAP remain in tact, though I always derive great pleasure from Curtis' editing, music selections, and eloquent narration.

I find the central argument of THE TRAP persuasive; however, I can't say with authority whether the western world's concept of freedom devolved from a "positive" one to a "negative" one during the Cold War since I was born in the 1980s. Curtis' typical web of theories, mini-biographies, and historical incidents is characteristically breathtaking, and it has a way of seducing me into agreeing with his version of history. Yet what of the people who have tried actively to make a world a better place in the past 70 years or so? Curtis tends to cleverly elide any information that would refute his thesis—which, in this case, is that western society no longer has a vision of positive social change and thus doesn't know how to fight for it. Still, having felt (like many people, I presume) alienated and powerless in the contemporary world, I found myself accepting Curtis' views on an emotional level.

To elaborate on my feelings about THE TRAP's characterization of psychiatry: I don't share Curtis' misgivings about how mental illnesses are diagnosed, nor do I feel (as the filmmaker insinuates) that they are a palliative for wrestling with normal human emotions. I was diagnosed with bipolar disorder when I was 20 years old, and I believe this was one of the best things to ever happen to me. With a diagnosis for my condition, I could pursue therapy and medication to help me manage my emotions and feel confident about navigating life. I don't think I was suckered into feeling this way by pop psychiatry or the pharmaceutical industry; rather, I think I was fortunate to meet competent mental health professionals who helped me get myself in order.

I may disagree with Curtis on some things, but I sympathize with his worldview overall and hold him in high regard as a filmmaker. Nobody's perfect.