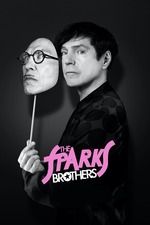 This satisfied my expectations insofar as it's about Sparks; I'd gladly watch even the most amateurish documentary about them. Yet I was often shocked by how lazy and uninspired this was as filmmaking. After an enjoyable first half-hour or so, THE SPARKS BROTHERS falls into a monotonous pattern: Edgar Wright introduces each album in Ron and Russell Mael's career, explains what it accomplishes musically, and finds some famous Sparks fans to say nice things about it. The movie tells us very little about who the Maels are as people, defining them almost exclusively by their art. That doesn't bother me (I think the Maels are entitled to their privacy), but Wright's analysis of Sparks' music is generally so superficial that the movie lacks any kind of organizing argument. I'd hardly call myself a fan of Wright's, but I recognize he's a talents entertainer whose movies, if nothing else, exude a distinctive sensibility. Some nice, brisk editing aside, this feels like it could have been made by practically anyone.