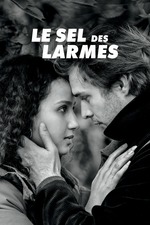 The Salt of Tears

THE SALT OF TEARS is distinctive among Philippe Garrel’s narrative films in that it doesn’t center on intellectuals or creative types; as such, it feels less immediately autobiographical than much of the great French director’s other work. Yet this distance between the author and his subjects doesn’t result in a sense of coldness or impersonality. Rather, Garrel (writing, again, with the venerable Arlette Langmann and Jean-Claude Carrière) seems downright rejuvenated, more curious about people than he has in years. The life lessons of his post-REGULAR LOVERS work open onto universal wisdom here, reflecting the callousness and impetuousness of young people everywhere. The protagonist is a 20-ish carpenter named Luc, who arrives in Paris at the start of the film to take an admissions exam at an elite woodworking school; before the test, he crosses paths with Djemila, a young working-class woman about his age. The two fall in love, but Luc returns home before things can get serious. Back in his home town, Luc chances upon his first love, Geneviève, for the first time in several years. They enter into a hot and heavy romance, and Luc begins to neglect Djemila when she calls or texts from Paris. This chain of events repeats several months later when Luc, accepted into the woodworking school, goes back to Paris, takes up with a nurse named Betsy, and gives Geneviève the cold shoulder. Only too late does he learn how wrong he was to reject women who cared for him deeply. As usual, Garrel is less interested in generating suspense than he is in capturing delicate states of being (erotic fascination, romantic yearning, regret) and finding endless nuance in the physicality of his performers and the textures of black-and-white 35mm widescreen. There is, however, a compelling spikiness beneath the movie’s gentle surfaces, and it becomes especially prominent once you realize that Garrel and his co-writers have placed a villain in a position normally occupied by the hero of a story. Luc doesn’t see himself as a villain (but, then, who does?) because he doesn’t open up to the people around him and thus doesn’t get close enough to people to really hurt them. He may successfully lie to himself, but as the film’s abrupt, devastating conclusion reminds us, one can succeed on this front for only so long.