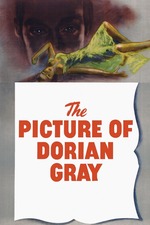 The Picture of Dorian Gray

The Picture of Dorian Gray 1945

As a fan of PANDORA AND THE FLYING DUTCHMAN, I was excited to watch this when I learned it was written and directed by Albert Lewin. Lewin possessed a rare sensibility informed by painting, 19th-century literature, and cheap supernaturalism—which makes him the ideal filmmaker to adapt The Picture of Dorian Gray. I can't say for certain whether the film preserves a lot of Oscar Wilde's language, as I haven't read the book since high school; but it does capture Wilde's epigrammatic wit as I remember it, not to mention his homoeroticism and fascination with immorality.

I was reminded by the IMDB trivia page that Dorian Gray is more emotional in the original novel than he is in Lewin's adaptation. Still, I liked the iciness of the character here. I think it jives with the overarching themes.

Also, I'd seen the Ivan Albright painting countless times at the Art Institute, so I was delighted when it made its dramatic appearance here.

Father of My Children