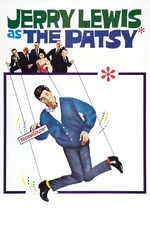 I hadn't seen this before, even though I'd seen most of the movies Jerry Lewis made around the same time: WHO'S MINDING THE STORE?, THE NUTTY PROFESSOR, THE DISORDERLY ORDERLY. I'd say this is as good as any of those, maybe even as good as THE BELLBOY or THE LADIES' MAN. Some sequences had me dying of laughter; moreover, I felt Lewis' direction never flagged—the exacting framing reveals a method behind the comic madness.

This could make for an interesting double feature with I'M STILL HERE. Both films are about childlike idiots ushered through the world of celebrity by a team of cynical handlers and hangers-on. (THE PATSY also features a song—"I Lost My Heart at a Drive-in Movie"—as bad as anything in I'M STILL HERE.) And both reflect a love-hate relationship with show business that extends to virtually all human interactions, which are made to seem like forms of show business.

The final scene builds on the cutaway-set gag from THE LADIES' MAN cleverly, as Lewis "bears the device" in high modernist fashion.