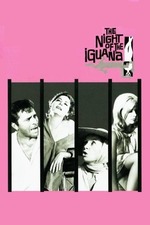 The Night of the Iguana

Apparently the play on which this was based (and which, I admit, I haven't read or seen performed) was Tennessee Williams' last Broadway hit. It feels a bit like a greatest-hits collection of his accomplishments of the 1950s, touching on perennial Williams themes of squalor, lust, loneliness, failure, sin, and redemption. That isn't a bad thing necessarily, provided that the language is characteristically brilliant; based on what I heard in this adaptation, it is.

Great black-and-white cinematography by Gabriel Figeuroa and very good work from the cast. I can't remember liking Ava Gardner this much elsewhere; her performance showcases her earthiness and boisterousness, and it grounds the rest of the film. Deborah Kerr does a lot with the prim eccentric she plays, evoking memories of her Sister Clodagh in BLACK NARCISSUS.

For all the film's virtues, it felt to me like less than the sum of its parts, for reasons I can't yet put my finger on.