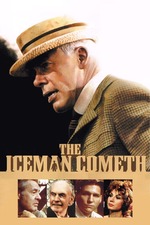 For a long time, I thought this version of THE ICEMAN COMETH used the complete text of the play; actually it's incomplete, with an entire character having been excised in addition to various lines of dialogue. Still, the film feels definitive—the characterizations are so rich and precise that you get lost in them as if you were reading an epic novel. I think Robert Ryan gives the film's greatest performance, bringing his finely honed world-weariness to a character entirely without hope (apparently he knew he was dying of cancer when the film was being shot), but Jeff Bridges is also extraordinary, making O'Neill's measured dialogue sound spontaneous.

Back to that novelistic quality: one thing I love about ICEMAN COMETH is how O'Neill juggles so many themes at once. The two most obvious are alcoholism and failure, but there are also profound considerations of race, radical politics, family ties, sex, and guilt. Also, the play rests on a fascinating—and very literary—tension between realism (in the historical details and the depictions of alcoholism and vice) and stylization (i.e., O'Neill's dialogue).

John Frankenheimer's direction is impressive, in part because it doesn't try to upstage the writing. His subtle camera movements and deep focus compositions have the effect of drawing you into the language. Ralph Woolsey's cinematography, with its lush shadows, feels like the best work Gordon Willis never did.

I Walk the Line