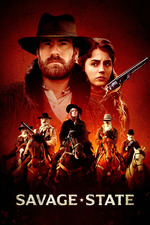 Kat was reviewing this for the Reader, so I agreed to watch it with her. I wish I had read a book instead, as I found the film monotonous and unrewarding.

SAVAGE STATE has an interesting premise. A well-to-do French family living in Missouri in the mid-19th century is forced to flee their home during the Civil War and cross dangerous landscapes to return to the east coast, where they plan to take a boat back to Europe. This journey away from the West suggests a metaphorical rejection of the American dream, or at least an example of how the Manifest Destiny did not reward everyone seduced by its promise.

I think the film loses sight of its potentially compelling subtext by introducing too many narrative elements that don't relate to it, like the unnecessary villains who pursue the family across the country and the anachronistic emphasis on the daughters' emancipatory self-awareness. Moreover, writer-director David Perrault isn't a good enough filmmaker to keep the movie interesting on the level of storytelling. Nice cinematography, though.