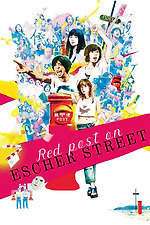 I have an odd relationship with Sion Sono. I like that he works so prolifically, tries out a wide range of ideas, and seeks to defy expectations. At the same time, I consider few of films to be entirely successful, and I consider more than a few of them bad. Maybe I like the idea of Sono the liberated, risk-taking artist more than I like his actual art. I'm OK with that. When so many movies are bland, formulaic, or timid, I'll take a Sono failure over many other filmmakers' modest successes.

That said, I appreciated RED POST ON ESCHER STREET very much (at least until the last ten minutes, when it simply falls apart). It may be the most focused narrative experiment by Sono that I've seen, proceeding according to something like logic. In the confident, exhaustive piling-on of stories, it's comparable to LOVE EXPOSURE, which I consider Sono's best film; but unlike LOVE EXPOSURE, Sono develops patterns between the narratives and encourages viewers to develop patterns of their own. The connection to Escher likely runs deep: like the great Dutch visual artist, Sono begins with a limited creative framework—considering the fates of everyone who comes to the open audition for a new film—and suggests an infinite number of variations.

Not all the variations are interesting; some feel like dead ends. But as Sono considers one group of wannabe actors after another, patterns of behavior emerge in addition to the patterns of narrative details. The accumulation of stories comes to suggest an entire society made up of broken people. Most of those people find palliatives in popular culture, whether it's movies or the celebrity that comes with appearing in them. While I enjoyed the episodes about the film director and his girlfriend/screenwriter, I was more fascinated by the nobodies who don't end up in the movie or who appear in it as extras. There's something comforting about a mosaic made of forgotten lives, as if the bigger picture grants greater meaning to the parts than they might have had otherwise.