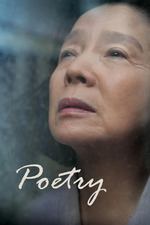 Lately I've been outlining my first novel, so I've been especially cognizant of how the films I've watched organize and deepen their narratives. Of course, constructing stories in cinema is very different than constructing stories in literature, but given how many films I've seen, it's probably inevitable that I'll be inspired by both media. And given how many novels I've read, it's probably inevitable that I feel a certain affinity for movies in a novelistic register—films with fanciful digressions, a surfeit of character development, and/or an overt appreciation of language. (I once programmed a series of this kind of movie at my friend Darnell Witt's long-defunct cine-club; I called it "Movies Into Literature.") Its title notwithstanding, "Poetry" is a supreme example of novelistic cinema and one of the best to be made in my lifetime.

One of the more literary qualities of Lee Chang-dong's films is their acute sense of time's passing. You can feel how the characters age and grow. Lee achieves this effect in a number of ways, but one of the more successful is how he revisits certain details from the early the movie later on, presenting them with new variations in the second or third go-round to illustrate how the characters look at them differently. (Howard Hawks was fond of this device, although I've never considered him an especially novelistic filmmaker.) The details can be as minor as the dirty jokes that a regular tells at the heroine's reading club in "Poetry." The first time we hear his jokes, they come off as awkward; the second time, we see how they make the heroine uncomfortable. Her discomfort results in a confrontation with the regular, who then apologizes and strikes up a friendship. This development comprises another great literary trick, one I love in both movies and books: the subtle transformation of a minor character into a major (or, in this case, a relatively more important) one. One of the special powers of fiction is that it reminds us of the unpredictable ways in which people mature. One of the most moving things about "Poetry" is that centers on a woman maturing unpredictably in her mid-60s, a subject that cinema rarely considers, and when it does, usually considers sentimentally.

Lee is not a sentimental filmmaker; indeed his tough scrutiny of his characters is one thing that makes his films endure. "Poetry" is also unsentimental in its development of the central theme: what is the purpose of art in society? Yang Mi-ja (played, in an astonishing performance, by Yun Jeong-hie) doesn't escape into writing poetry, nor does she use it to make sense of her traumatic experiences. Rather, she writes to transform her life into something beautiful, which is to say she creates something that endures too.

On the Occasion of Remembering the Turning Gate