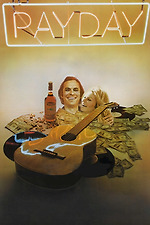 I can't say I "liked" this film in the sense that I enjoyed it, but then I suspect that I wasn't supposed to—the protagonist is such a horrible person that one seems meant to regard his behavior with shock and dismay. Still, I admire the unwavering negativity of Don Carpenter's script and Rip Torn's lead performance. The film shows persuasively how money and fame can corrupt a human being entirely, as Torn's hedonistic country singer Maury Dann treats everyone around him like dirt but gets away with it because they're all blinded by his celebrity. (I'm sure I'm not the first person to note how topical the movie feels in the early 2020s.)

The scene that sticks with me the most is when Maury throws his girlfriend out of his car in the middle of nowhere because she's getting jealous of the new young woman he's picked up and added to his entourage. It isn't subtle drama, yet to complicate the situation would entail giving consideration to Maury's feelings, and the film knows they don't matter. He's a monster, plain and simple.

Daryl Duke's direction is on the level of a decent TV movie, foregrounding script and performance and never really developing a visual sensibility, but I was OK with that because I was so wrapped up in the story and acting. The film is really a highlight in Torn's career.

The Trap: What Happened to Our Dream of…