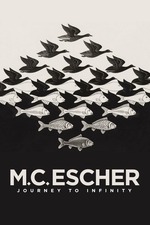 This documentary about M.C. Escher hangs on a clever conceit: all the narration comes from Escher’s letters and diaries, so the film proceeds as if the great Dutch artist is telling his own life story. Recited with delicious hamminess by Stephen Fry, the narration allows for a more intimate portrait than one usually gets from contemporary biographical docs; you come away from the movie having learned not just about Escher, but how Escher saw himself. One of the more interesting insights is that Escher didn’t see himself as an artist, but rather as a mathematician who worked in visual design to realize various logical puzzles. Apparently, Escher described the whole creative project of his mature period as one of depicting infinity within defined spaces—a paradox to describe a series of paradoxes! He also claimed to have less interest in achieving beauty with his work than a sense of wonder, which reveals his creative intentions as well as his modesty. Much of the personal information presented in JOURNEY TO INFINITY supports the film’s characterization of Escher as self-effacing: he maintained a low profile, spent much of his adulthood caring for his mentally ill wife, and gently disparaged the individualist youth counterculture that popularized his designs in the 1960s. The movie really sings when it gets into the designs themselves, often deploying animation to illustrate Escher’s lucid explanations of his work.