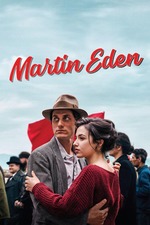 I liked how Pietro Marcello plays with the temporal setting of MARTIN EDEN. It's never clear when exactly the movie, which is based on a story written in 1909, takes place; it could be anytime between the late 1940s and the early 1990s. This out-of-time quality (heightened by the use of Super-16mm cinematography and old documentary footage) contributes to why the movie always feels like an epic: With every step Martin takes, he strides across decades of the 20th century.

A friend of mine described Marcello's stance as "post-historical," yet the movie feels more immediate than that term would imply. This has the sweep of Visconti's THE LEOPARD, but also the earthiness of his LA TERRA TREMA. It's also as immersive as either.

I'm still reflecting on whether I like the movie's third act, which deals with the hero's fame, his slide into decadence, and ultimately his undoing. After the bold, expansive view of the first two acts, this emphasis on familiar rise-and-fall tropes felt like something of a retreat. I'd be willing to rewatch the film to see if I'm wrong.