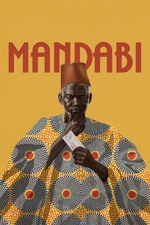 By the time Ousmane Sembène directed his second feature at the age of 45, he was already a legend. Sembène had been a war veteran, a labor organizer, the author of several book-length works of fiction, and the first sub-Saharan African to release a feature film. One might expect a movie by such an accomplished individual working at the height of his renown to display a certain grandeur or sweeping perspective, yet the greatness of MANDABI (as with most of Sembène’s films) lies in its humility. The story unfolds so plainly that it could be understood by a child, while the imagery, however bright and engaging, tends to be organized around such basics as character and locale. In short, MANDABI feels like a folktale; and like many folktales, the apparent simplicity serves as a conduit to deep wisdom. Dieng, the film’s put-upon hero, is an unemployed, but big-talking man who lives on the outskirts of Dakar with his two wives and seven children. Near the start of the story, Dieng receives a money order from a nephew living in Paris (in a bittersweet montage, Sembène illustrates what the young man has had to do to earn the money), who asks his uncle to cash the order, set aside most of the money, and keep some for himself. Dieng sees this windfall as a chance to pay off his debts, but cashing the money order (or mandabi in Wolof) opens up all sorts of new problems. He learns he lacks the proper documentation required for any banking transaction—and that acquiring this documentation means tangling with an especially messy local bureaucracy. Dieng also finds himself besieged by strangers and acquaintances coming out of the woodwork and asking for loans. But the biggest setback of all comes in the form of a “New African” businessman who promises to help Dieng solve his problems. Sembène characterizes the businessman with the same bitter, satirical sensibility he’d later flesh out in his novel Xala (and his film adaptation of it), but for the most part, the writer-director reserves his anger for institutions rather than individuals. MANDABI condemns the societal factors that keep people in poverty while maintaining, against all odds, an ingratiatingly cheery tone. When seen from the proper perspective, Sembène asserts, injustice is nonsensical enough to seem funny.

In This Our Life