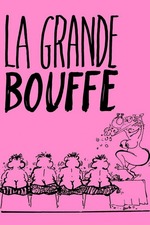 They may be interrupted by occasional commercial breaks, but the movies available on the free streaming site Tubi are almost always uncut. Even the recently added LA GRANDE BOUFFE, Marco Ferreri’s classic of shock cinema, exists on Tubi in its NC-17 version. But like a number of films in their catalogue, Tubi’s copy of LA GRANDE BOUFFE is still distinctly marred; for more than half of the running time, the English subtitles are about two seconds out of sync with the French-language audio. The upside of this problem is that lets viewers imagine they’re watching LA GRANDE BOUFFE not at home, but at a misfortunate repertory screening that got a bad print of the film. Speaking for myself, I cherish such mistakes, as I cemented my cinephilia at many such accident-plagued revivals where the film was faded or out of focus, the subtitles were illegible, or the sound was too soft or too loud. Screenings like these force you to work for your cinematic art, to strain your eyes or ears to extract whatever it is that makes the movie special. A subtitle error like the one that’s befallen Tubi’s version of LA GRANDE BOUFFE might make you concentrate harder on the images to gain clues about what you’re not getting from the dialogue—though Ferreri’s deliberately appalling images would command attention regardless. The film’s premise is well-known: Four well-to-do middle-aged Frenchmen lock themselves away in a villa on the Paris outskirts with hordes of gourmet food and proceed to eat themselves to death. Accompanied by a few prostitutes and a surprisingly accommodating schoolteacher, the men engage in some sexual hijinks as well, the gastronomic and libidinous pleasure merging in a whirlwind of gluttonous excess. Ferreri presents this comedy of annihilation in a straightforward, somewhat delicate manner that makes it all seem weirdly inevitable; in this way (as well as in its cloistered setting) LA GRANDE BOUFFE anticipates Pier Paolo Pasolini’s apocalyptic SALÒ, made two years later. But where Pasolini created a Sadean nightmare about fascism, Ferreri’s film is a grotesque satire about liberal democracy that imagines the French bourgeoisie literally dying on its privileges. The sustained attack on the bourgeoisie comprises lots of bad-taste jokes on subjects historically considered too delicate for polite conversation: messy eating, bodily functions, sex, prostitution, and ultimately death. Heightening the shock of so many shattered taboos are the fully committed performances by a quartet of actors then considered among the most distinguished in European cinema. Ugo Tognazzi, Michel Piccoli, Marcello Mastroianni, and Philippe Noiret bring relaxed, debonair charm to their roles, and their imperturbability, like Ferreri’s refined filmmaking, renders the gross-out humor all the more shocking.