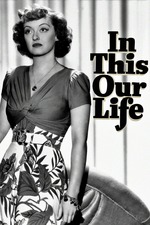 In This Our Life

After watching his MOBY DICK and FAT CITY on Tubi, I requested a number of John Huston-directed films from the library. Some I'd seen, some I hadn't; in any case, I'd never had a phase with Huston, so I thought it might be constructive to spend a concentrated period thinking about his work.

IN THIS OUR LIFE was the first to arrive at my neighborhood branch of the CPL. I watched it before and after running errands on Saturday afternoon. I admit I didn't give this my full attention; at the same time, something about the film made me resist it. Like many Hollywood films adapted from well-respected novels (the book this was based on won the Pulitzer Prize), this has a veneer of seriousness but lacks the sort of persevering thoughtfulness one associates with serious literature. Simply put, the story moves too fast for the characters to register as anything more than archetypes, regardless of how good the actors are. What emerges is a series of big moments without any of the little moments that draw us into another person's life.

Some of my predecessors at the Chicago Reader devalued Huston on the basis of his literary adaptations, arguing that his fidelity to the plots, but not the interior content of great books resulted in a kind of "Classics Illustrated" cinema. At this early stage of my Huston phase, I'm inclined to agree.