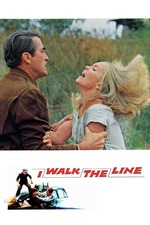 I Walk the Line

I'm glad Tubi had this one in the correct aspect ratio, as John Frankenheimer's use of widescreen is probably the best part of this movie, which I'd file under Interesting Failures. Frankenheimer takes advantage of the increased opportunities for negative space to create compositions analogous to the characters' emotional isolation. It's smart filmmaking, if a little forced at time.

According to IMDB, Gregory Peck hated this movie, in part because the studio cut out a prologue and epilogue that, Peck felt, provided necessary context for the story. I haven't seen the excised the material (Is it available anywhere?), but I did suspect that the version of the film I saw was missing something. Outside of Peck's sheriff, none of the characters feels particularly developed, and the intense focus on the sheriff's sexual relationship with an impoverished young woman (played by Tuesday Weld at the height of her powers) doesn't yield any profound insights into either character. The age of the young woman is never established, raising the possibility she's a minor. If so, then Peck's character—a far cry from Atticus Finch—would be despicable rather than merely pathetic.

The imposing shots of the Kentucky hills hint at an epic narrative, while the timeless Johnny Cash songs on the soundtrack evoke enduring values of heroism and love that never materialize. The tension between the songs and the narrative forms a sort of cinematic counterpoint similar to what Robert Altman would achieve in MCCABE AND MRS. MILLER, which came out the year after this.