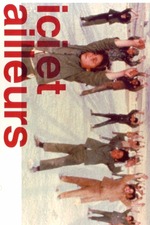 ICI ET AILLEURS communicates a sense of helplessness above all. In the film, Jean-Luc Godard and Anne-Marie Miéville note how in France (aka "Here") middle-class families complacently watch TV while in Palestine (aka "Elsewhere") revolutionaries mourn fallen comrades. The work incorporates documentary footage that Jean-Pierre Gorin shot in Palestine at a revolutionary training camp in 1970; the narration informs us that the footage was intended for a film called "Victory." That film was never made, and five years later, Godard and Miéville inform us, many of the subjects of that footage are dead. The damning images of the middle-class family echo shots from Godard and Miéville's NUMÉRO DEUX, released the year before this; the Palestinian footage looks back to the cine-tracts by the Dziga Vertov Group, which had disbanded since the footage was shot.

At the same time, this addresses subjects of death and loss more directly than Godard ever did before or after. The film has a sympathetic quality that's rare in his oeuvre.