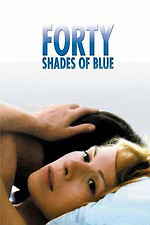 I find the films of Ira Sachs (no relation) refreshing because they're American movies that seem to have no American influences. Sachs' interest in grown-ups, his oblique approach to storytelling, even the way he organizes people within frames feel more in keeping with European art cinema of the past few generations than with most American movies made during the same time. (It's telling that when Sachs makes an extended reference to an American film, in LOVE IS STRANGE, that film is Leo McCarey's MAKE WAY FOR TOMORROW.) This foreign influence keeps the films unpredictable—even if the action is familiar, we're never sure how it will appear.

I revisited FORTY SHADES OF BLUE because I'd recently watched FILM ABOUT A FATHER WHO, a documentary portrait of Sachs' father by his sister, Lynne Sachs. I noted during FILM ABOUT A FATHER WHO how similar the Sachs siblings' father was to the character Rip Torn plays in FORTY SHADES. If anything, the Torn character seems saner and more easily forgivable than Ira Sachs, Sr. Also, I would hope that Ira Sachs, Jr. is a more sympathetic individual than the character of Torn's son, who is revealed to take after his father in his callousness and destructive behavior.

I found this especially interesting when Sachs and his cinematographer seemed to be challenging themselves to see how close they could get to the actors while keeping them out of the shot.