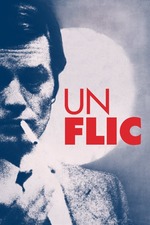 More of a collection of set pieces than a fully realized narrative, this still wins me over with its style and the intricacy of its complications. The mission on the train is so convoluted that I barely understand what's happening no matter how many times I watch it. One might say the passage represents the triumph of cinema over real-world logic; it commands attention despite being wildly implausible. (Then there are the adorable miniatures in the shots of the helicopter approaching the moving train, which always make me think of low-rent children's television.)

Despite the solemn quote that leads off the movie, there's little here to suggest a grand statement on Melville's part about the nature of lawmen. The movie thrives in its particulars, like the cold color palette, the equally cold efficiency with which the male characters transfer important objects, a quick tracking shot through a group of dancers performing a burlesque number.

Father of My Children