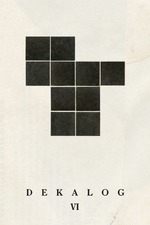 This episode of the DECALOGUE may be the most ambiguous in terms of how it relates to the commandment in question. Just who is committing adultery in the story? I don't think there's a single married character in it.

One thing I admire about the fifth episode of the DECALOGUE is that it compels me to imagine how the God of monotheistic western religions might view humanity, something I've rarely done since childhood. The death scenes in that movie achieve an intimacy that feels almost invasive—viewers are made conscious of how they're seeing moments that no other human beings are privileged to see; they also unfold from a dispassionate and unwavering perspective suggesting One who not only sees, but judges all. On this rewatch of the series, I'm seeing that perspective in all the episodes.

For me, the crucial development of the film is when Kieslowski and Piesiewicz shift the main character of the story from Tomek to Magda. Only when we see him through someone else's eyes does the film inspire sympathy, even love for Tomek. Subtly embellishing this theme of seeing, one of the most important motifs in DECALOGUE VI is a telescope.