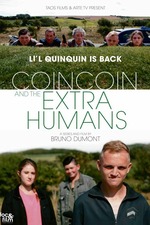 When I first watched this two years ago, I didn't stop to consider what Bruno Dumont might be trying to say with this series, much like I didn't give much thought to what LI'L QUINQUIN was "about" when I first watched that. But revisiting EXTRA-HUMANS made me wonder if, beneath the ridiculous humor, Dumont wasn't trying to comment on the entrenchment of far-right politics in provincial France.

The series reveals almost nothing about the political candidate for whom CoinCoin and his buddy Fatso occasionally do odd jobs, but his campaign team's general clannishness and their contemptuous attitude toward a journalist evokes the behavior of far-right political parties all over, not only in France. Then there's the general anxiety about the African refugees who have set up camp on the outskirts of CoinCoin's village, a carry-over of the Islamophobia so central to the first series. There's also the motif of cloning; its project of making people the same implies a rejection of difference.

I'm still not sure what these allusions add up to. As in the first series, Dumont regards the yokels on display with a combination of affection and contempt (the works recall the Coen brothers in that regard, though I find Dumont's humor a lot funnier than the Coens'); neither emotion ever quite dominates the other, making it difficult to determine how Dumont really feels.

If this is just absurdism, plain and simple, then it's masterful absurdism. Dumont's rigorous aesthetic, rooted in the forbidding landscapes of the northern French coast, creates an appropriately despairing atmosphere for the jokes to resound in. And the jokes slay. I could watch Carpentier drive his car on two wheels over and over.