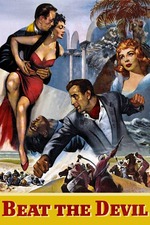 My John Huston phase continues with the writer-director's collaboration with Truman Capote. I hadn't seen this since high school, so at this point it was as if I hadn't seen it at all.

Like Welles' THE LADY FROM SHANGHAI, this combines film noir ambiance with a jokey sensibility in the language (nice epigrams, Capote!) as well as the visuals. The film also anticipates Welles' MR. ARKADIN in some of the baroque, travel-centered plotting. But for all the connections to Welles, the filmmakers I thought of most were Joel and Ethan Coen. BEAT THE DEVIL feels like a Coen brothers film avant la lettre in the assured craftsmanship, literate dialogue, pileup of narrative complications, and lovable idiots who populate the cast of characters.

Jennifer Jones has got to be the MVP among the actors. For me, the biggest laughs of the film came from how she played her character's infatuation with Bogart—a mix of school-girl naiveté and genuine madness. As for Bogart, he has never reminded me more of Bugs Bunny than he does here.

The Tree, the Mayor and the Mediatheque