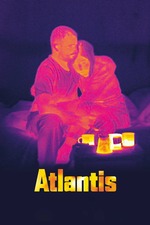 This film made me nostalgic for watching movies in a theater. Almost every shot feels designed to be appreciated on a big screen; director Valentyn Vasyanovych generally keeps the camera at enough of a distance from the action so that one regards the human behavior as part of the landscape. (The landscapes, whether mountainous or flat, are pretty compelling.) Since I was watching ATLANTIS on our medium-sized television, I couldn't see the characters in the same definition or size as I would have at the Gene Siskel Film Center (which is hosting Chicago's virtual premiere). I think my overall impression of the film was diminished as a result.

Seen outside of its ideal setting, ATLANTIS felt to me like familiar art-house miserablism, barring some nicely staged shocks. I'll admit I was inclined to dislike the film after an early scene depicting a random act of violence from a dispassionate point-of-view—it felt like a finger-pointing provocation tactic I generally find cheap. Scenes like that and the film's later autopsy sequences seem meant to spotlight the dehumanizing nature of war and its aftermath, but draw more attention to the artistic aspirations of the filmmakers.