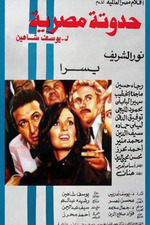 For maybe a good half-hour of its running time, the second film of Youssef Chahine's autobiographical tetralogy is structured almost like an experimental film. Chahine's autobiographical stand-in undergoes heart surgery, and the movie takes us inside his unconscious mind, drifting between memories and dreams. Many have compared this to Bob Fosse's ALL THAT JAZZ, which came out a few years earlier, but I find it closer in spirit to the Bergman and Fellini films Fosse was drawing from.

After that quasi-experimental stretch, the film settles into a dramatization of events from Chahine's early adulthood and the first decade of his filmmaking career. It would come off as narcissistic if Chahine's personal conflicts weren't so fascinating. Chahine grew up on Hollywood movies and clearly respected a lot of European ones; his mission to find respect among western audiences speaks to his desire for acceptance by his artistic models. At the same time, Chahine is proud of his Arab identity and on some level fears the West because of its support for Israel.

1) The setting of the dream sequence is supposed to be Chahine's stand-in's heart, and the charmingly cheap production design suggests a Sunday school play about Jonah and the whale.

2) Why does the actor playing Henri Langlois look like a two-bit pimp?

3) The child actor playing Chahine as a little boy has his hair shaped into a point; between this and his costumes, he looks like he came out of a 50s sci-fi movie.