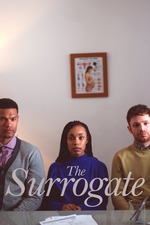 Jasmine Batchelor reminded me of Sally Hawkins in Happy-Go-Lucky through much of this movie. Her Jess remains breezily optimistic through circumstances that have those around her folding into themselves, and the movie functions partly as a morality tale, at least for me, as I found myself wanting to approach life more like she does. As her options narrow, her fierce fighting side emerges; so do some insecurities. It’s a tremendous feature debut.

The movie around her is layered with complicated characters whose limitations collide with her stubbornness. Writer-director Hersh shows so much tenderness even in the harsher exchanges.

He builds some impressive long takes, but many scenes are short, ending when a question has been raised or implied but not answered. The film keeps digging its nails into your skin.

As a queer white guy, Hersh could’ve made a very different film, one with a white protagonist, and with gay characters who aren’t so challenging to stay engaged with. What he did instead is nervy and vivid, with deep compassion, particularly for people with disabilities.

Before I recognized her face, I knew that was Tonya Pinkins playing Jess’ iron-willed mom; that voice is unmistakable.

I streamed this in support of the Philadelphia Film Society.