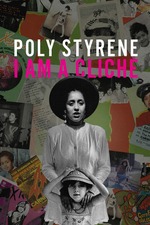 Poly Styrene: I Am a Cliché

A doc that’s remarkable for the many stories that it tells and for the how it tells them.

Co-directed by Poly Styrene’s daughter, it’s about their relationship as much as her mom’s punk band — which was whatever the nonsexist version of “seminal” is — mental illness, and spiritual awakening. (Curiously, that last transition started with a mysterious vision of pink light, the same radiant color that led to Philip K. Dick’s breakdown/breakthrough.)

Visually there are no talking heads, just voiceovers with an absorbing collage from her personal archives and from some wisely curated period footage. The voices come from her family and bandmates as well as peers from the likes of the Raincoats, the Homosexuals, and the Selector, plus those she influenced, including Kathleen Hanna, Neneh Cherry, and Thurston Moore.

At one point, the writer Vivian Goldman says that cocaine turned people in NYC “into demons,” while we see the great Holly Woodlawn writhing on a disco floor in an asymmetrical dress; I think Holly might’ve appreciated that.