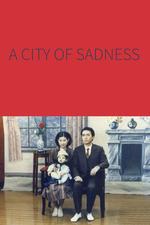 Admittedly my first Hsiao-hsien Hou film but I doubt that is my issue going up against this majorly praised critic's darling. No, my main concern of the film is plainly my disengagement with it. I was not aware that some knowledge of Taiwanese/Chinese history was required prior to watching the film however even that I do not think was wholly a part of the problem. It's fairly easy to decipher that the film takes place post-WWII, Japan had previously occupied Taiwan and now China has regained ownership and the new occupation is now worse than the previous. Although the events that I have briefly read about before and more so after watching the film (about massacres, secret arrests and round ups) were not so much clearly depicted in the film. Now I read of course that Hsiao-hsien Hou did not want to focus on the violence and bloodshed of the time but rather show a personal portrait of a fictitious family's struggle through the harsh times. While that is admirable to do instead of the borderline glorifying of violence that some of these historical films are capable of, it does not help my cause in trying to understand better the atrocities that these people went through. Bottom line my disengagement spawns from an incoherent plot that I barely understood and had a most difficult time in trying to understand throughout (which puts a great hindrance on the overall experience). Come the end of the film I feel like I do have a general knowledge of who was who in the film and what exactly happened but it came too late and of course there was still too many other missing pieces to the puzzle (as far as sub plots) that went completely by me.

Truly a confusing and incoherent film experience. Even though I mentioned that I have a general knowledge of the characters and events, that is honestly only focused on the main central family and no one else. I still have no clue what the gangsters were for, who they were and what the drama was that took place midway through the film. Or even how a family tale became a gangster tale and then became a political warfare tale. It all just seemed so nonsensical in how the material was presented. I just flat out did not get this film so congrats to the many who did. I feel even with a rewatch and a more detailed explanation of the film from some other source, I still would not enjoy the film on the level so highly praised by others simply because I am not a fan of Hsiao-hsien Hou's disordered structure because it takes so much away from any emotional resonance or connection conveyed in the material to the audience.

I still rate it above average despite my experience with the film not being fruitful at all because I can see Hsiao-hsien Hou's talent and the film itself being very well technically crafted. The cinematography I would not say is very visually appeasing but the long distant shots and other camera placements/movements shows a professional kinship that I can respect. I am also a fan of the acting which was very naturalistic even if it was at times incredibly subdued (same as the story). But I just could not get on board completely with everyone else in absolute appreciation for this film.