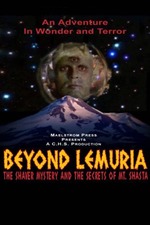 Have you ever listened to Coast to Coast AM when Art Bell hosted it and would do open calls? This is the video version, complete with stories about HP Lovecraft stories being real, UFOs around Mt. Shasta, the Shavers mystery, Jesus, three-eyed aliens, orgasm torture, conspiracy conventions and so much more. There’s a ninja, too.

This is the kind of movie that will try the patience of normal people’s minds and souls. It’s all shot on video, so it looks like complete shit, yet it’s fascinating in the way watching YouTube videos about the Mandela effect for hours on end while sitting in a smoke-filled room can be.

Oh yeah — and the same cast plays two roles: Satanists and a group of new age folks led by Ascended Master Phylos, who cames from Atlantis, and takes them on a quest similar to The Holy Mountain. Except you know, instead of Alejandro Jodorowsky, you’re getting a virtually non-directed mishmash of a film from the Ordo Templi Astartes, a lodge of Hermetic occultists based in Southern California.

This reminds me of Tribulation 99: Alien Anomalies Under America, a found footage film that sought to explain Castro, why we attacked Grenada and the end of the world. Tribulation 99 was David Icke and Alex Jones before those guys and their characters became well-known but somehow much stranger.

It also makes me fondly remember the Unarius cult, who make their own movies that document their past lives. You can learn more about them in the film Children of the Stars.

How does one even get into the Shaver phenomena? I can try.

Richard Shaver first encountered Lemuria when the tools at a factory where he worked allowed him to hear other peoples’ thoughts, as well as torture sessions going on beneath the Earth. He quit his job and became homeless for some time, but on the other hand, he may have also had paranoid schizophrenia.

He disappeared for some time, then began writing to the pulp magazine Amazing Stories and claimed to have discovered an ancient language he called Mantong. Editor Ray Palmer (the namesake of DC Comics’ Silver Age version of The Atom) thought that Shaver was onto something.

Shaver then wrote “A Warning to Future Man,” where he discussed cities within the Earth, populated by the good Teros and the evil Deros. Palmer rewrote Shaver’s allegedly true account and created the fictional story “I Remember Lemuria!” which appeared in the March 1945 issue of Amazing Stories. That issue instantly sold out and then something really weird happened: thousands of letters began appearing saying that they’d had the same experiences as Shaver.

The Shaver Mystery also boasts Fred Crisman amongst its believers. The real-life inspiration for TV’s The Invaders, Crisman is a conspiracy nexus: he was supposedly one of the three hoboes in Dallas during Kennedy’s assassination, he was one of the first people in the U.S. to report a UFO and he battled the Demos in a cave during World War 2.

Amazing Stories‘ readership either loved or hated the Shaver stories. According to Wikipedia, “Palmer would later claim the magazine was pressured by sinister outside forces to make the change: science fiction fans would credit their boycott and letter-writing campaigns for the change. The magazine’s owners said later that the Shaver Mystery had simply run its course and sales were decreasing.” One of the biggest critics of the Shaver stories was a young Harlan Ellison!

That didn’t end the Shaver stories. Palmer credits these tales with the public fascination with UFOs. John Keel’s 1983 Fortean Times piece “The Man Who Invented Flying Saucers” claims that “a considerable number of people — millions — were exposed to the flying saucer concept before the national news media were even aware of it. Anyone who glanced at the magazines on a newsstand and caught a glimpse of the saucer-emblazoned Amazing Stories cover had the image implanted in his subconscious.” Indeed, Palmer was quick to defend the Shaver stories and claim that “flying saucers” were their validation.

Beyond Lemuria reminds me of the blind date I once had that led me to a meeting of the OTO somewhere in the hills above Pittsburgh. I expected a Bacchanalian riot in the tradition of Crowley and was instead greeted by skunk weed, blue crab in a can, bad beer and a room full of devotees eating guacamole in mass amounts from Tupperware while praising their Frater while he held a spoon aloft as everyone watched bootlegs of a Blondie concert. Also, everyone went out at midnight and farted at the moon. I learned a really good fact that night: hardcore Crowley devotees are about as annoying as evangelical Christians.

To wit: It’s all rather fascinating to tell as a quick tale of my life, but the truth is, experiencing it was an excoriable bore.

I don’t want to hate on this film. I love that it exists, but it’s like watching people cosplay. It makes me feel bad for them in their subculture, but then I realize that I can talk about obscure movies and hardly had to look anything up to discuss even more obscure 1940’s conspiracies. I read Illuminatus! and Do Androids Dream of Electronic Sheep? before I hit puberty. My Christmas gifts from my parents usually consist of books and DVDs about the Lost Books of the Bible and Michael Aquino. I am of this culture, but I don’t feel the need to dress up and film a movie about me and my friends skulking through a cave.

You know what? Just watch this yourself and tell me what you think. You’ll start to notice elements of weirdness in your life. I really hope so. Reality is fucking boring. That’s why I watch so many movies.