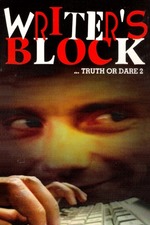 Elliot is a teenager who enjoys anything horror. What he enjoys the most though is the flick Truth or Dare directed by cult horror icon Tim Ritter. He enjoys it so much that he plays the game in real life with deadly results.
Jack is a horror novelist who is suffering from a case of writers block. He has tons of fans who ask him for autographs & he even has a talk show appearance. His career is going great but that writers block is really messing with him. He can't seem to shake it & he has a deadline. He needs to write his next horror novel.
Well, Jack ends up finding a journal written by Elliot in a box that says MY STUFF FUCK OFF which describes all his darkest thoughts, his life, & more importantly, his obsession with Truth or Dare. Also in this box are tapes of Traces of Death, Truth or Dare, The Burning Moon, Dark Forces, & a few kickass drawings. Jack does a bad thing. Jack writes a novel based off the journal & guess who reads that novel? If you guess Elliot, you are correct.

Writer's Block is an entertaining thrill ride that's full of twists, blood,& has an extremely dark toned, well written story. It's unique, has great performances from the cast, & it's pretty creepy too. It's another fun one & I had a blast with it.

There's a directors cut included on the disc which is a few minutes longer. It's in black & white too which I think is sweet. I'll have to give that version a watch soon.