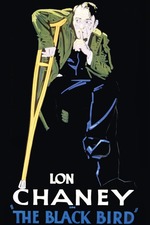 The shape that the crippled Bishop is frozen into reminds me of Pan playing the flute. I wonder if that was an inspiration for Chaney.
Some of Tod Browning’s strongest direction is on display here. I say it’s up there with THE UNKNOWN, arguably his best film.
Chaney is reliably invested in his role(s) of the villain, Renee Adoree is beautiful and charismatic, but I was surprised by how much I enjoyed Owen Moore in an understated performance as Chaney’s rival. None of the acting is too theatrical. Even the editing and rhythm is fairly modern. This is one of the few times where the film is just as good when Chaney isn’t on screen. Usually he’s the main attraction, or even the sole attraction. The way Blackbird is portrayed as receiving his karma is weak, but that’s my lone complaint.

NOTE: Speaking of Adoree, it’s disturbing how predictable it is. Every time I see a young, charming actress from the silent era that I instantly like, I know she died young. Sure enough, I google her and she only lived to 35. Died from TB. So sad. It just seems like so many 1920s actresses died shortly after sound films took over, for one reason or another. Weird.