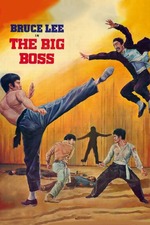 Unable to find work in the countryside, Bruce Lee moves to a town where he has some family. He’s set up with a job, only to find that the big boss is a corrupt drug trafficker, and half his employees are nothing but hired thugs! It’s a razor thin plot, designed to provide maximum fight scenarios. That’s fine with me.
Bruce seems a bit timid in the first act of this early starring role, but I think it’s because his character is shy and new in town, because he’s a whole different person by the end. The thing is, his character avoids violence for the first half of the movie, so he just watches. That doesn’t seem ideal at first, but it makes more of an impact when he finally can’t take it anymore.

NOTE: There’s a hilarious scene where Bruce fights some dogs, and they’re like ninja kicking through the air!

NOTE 2: Lee doesn’t make any cat noises in this one, but he does taste his own blood for some reason.

NOTE 3: The massage girls give literally the worst massages I’ve ever seen.