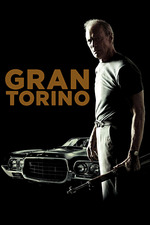 Yes, you saw that right. I absolutely could not stand this film. I have never in my entire life had such a visceral hatred for a film. I genuinely think this might be the worst film I have EVER seen. I am just racking my brain trying to think of one, just ONE, redeemable quality of Gran Torino, but I seriously cannot find a single thing that I liked about this, and I am just seething after watching this.

I don’t know how much longer I could’ve handled Clint Eastwood mumbling and grumbling about his disdain for the kids these days, or hear any more of his racist remarks that are somehow forgivable because he was in the war or something? Every character is just a caricature of racial stereotypes, creating the most one-dimensional cast I have ever seen. Kids are on their phones at funerals, Clint Eastwood’s family is constantly asking for his prized Gran Torino and… football tickets?? Also, the acting is just horrendous, and the cinematography is so incredibly bland.

Clint Eastwood plays the character of a racist war veteran who despises Asian people, but there is an Asian family next door that he learns to not hate. However, this is NOT a character change. He still despises their people and his acceptance of them is just a one-off thing as his backwards racist ideology still holds at the end of this movie. Clint Eastwood is horribly out of touch with reality and just when I thought it couldn’t get any worse, he falls into a Christ pose as he makes the ultimate sacrifice for the community, I guess? I think at that point I was supposed to feel as if he redeemed himself but all I could do was roll my eyes at his pathetic attempt at a redemption arc.

Clint Eastwood tends to do this thing where he clumsily designs a redemption arc around an obvious character trait because he doesn’t know any other way to do it. In Unforgiven, his character constantly rejects alcohol to the point where its absurdly comical and then suddenly he accepts it, and you know the character has changed. In this one, he constantly tells his priest to call him Mr. Kowalski, not Walt, at least 5 times. Finally, when we all see it coming, he tells him to instead call him by his first name because that’s character development, I guess.

This film is just a perpetual eye roll for me. Watching this film brought me back to my most primal form as I desperately wanted this to be over, but I kept thinking just maybe it would get better, but it never did as it continually spiraled into a film that congratulates Eastwood’s character for being a horrible person. I am struggling to find what anyone could possibly see in this film as I reach deep into my psyche to think of a positive moment inside. And then right at the end, Clint Eastwood starts to sing a song about his Gran Torino and I realized that my feelings were valid and this film is just atrocious.