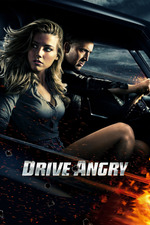 As the tagline says, one hell of a ride.

This is actually a, while kinda stupid, fun movie.

Nic Cage is as fun as he always is in every film, hamming it up, but he has great line delivery while delivering even the hokiest lines.

Amber TURD is ok I guess, nothin but eye candy, lot of actresses could’ve easily played the role as good if not better. I really struggle seperating the reality of her being a shitty and fake human being from her work in films, granted she never was the best actress to begin with. 🤷🏼‍♂️

William mothafudgin Fichtner clearly had an absolute BLAST hamming it up as “The Accountant” who poses as an FBI agent and very clearly has super natural talents as he’s Anubis, the god of Death, essentially the Grim Reaper… Oh, and knows both Jesus and Satan. So thats pretty dope I guess.

Script is pretty terrible and nuts. But thats part of its charm I’d say. Its fun. The CGI is pretty bad though lol