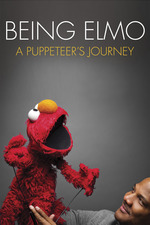 I recently read (well, listened to- I have an hour commute every weekday give me a break) the Jim Henson biography that I had heard about for years and I was absolutely stunned by it and emotionally shaken by it beyond simple words. Since them, I've had an itching to go research even more into the Jim Henson department. If you guys follow me, you know that I am a Muppet fanatic and have been for years. I've seen every Muppet Movie, currently going through the show- I could tell you the names of all the characters and even the puppeteers who operated them. Certainly, if someday I achieve my dreams and am able to make my own films I would love to mess with puppetry and create elaborate creatures, it's simply one of my loves. I'm even going to be able to visit Henson Studios this June!

Anyways, I saw this on my Netflix feed today and remembered, "oh yeah, I need to watch that" and meant to just start it and watched the whole thing, so already a good sign.

I don't know if this will work as Universally for everyone with any sort of interest. Don't get me wrong, I think anyone can find joy in this film, it's kinda hard not to but for me personally, someone who's an aspiring artist and a muppet fan, this all hit me right where I live. With just finishing Jim Hensons biography, I was even able to fill in parts of the story Kevin was telling and hearing his perspective, and that was incredibly neat.

This isn't Won't You Be My Neighbor levels of good, since that film uses every ounce of what cinema is to tell a strong narrative. This feels more like a really great behind the scenes feature of Sesame Street or The Henson Company, and I loved every second of it. The documentary isn't trying to reinvent the wheel or say anything profoundly new, but just put a jolt of inspiration and optimism within its viewers and it does that so well. This is such comfort food cinema. There isn't even any conflict in this film, it's all joy to be found in the thing I have found it my entire life, stories and imagination.