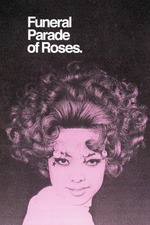 79/100
Ah, it seems I've caught the avant-garde bug these days. Toshio Matsumoto's insane debut feature Funeral Parade of Roses has left me a bit speechless. An itch finally scratched, seeing this was unlike anything before. One thing I find really interesting with these experimental films is while they're all equally bonkers in style, the experience with each varies and offers something new. Funeral Parade was a treat to say the least.

One of Kubrick's major influences for A Clockwork Orange, this 1969 Japanese film redefined what the art form can do. Mixing elements of arthouse, melodrama, experimental, avant-garde, and documentary, Funeral Parade is a beautiful montage of chaos. Moving back and forth from past to present in different perspectives, jump cutting as if it were part of the French New Wave, matching scenes and positions, and speeding up certain sections, this film is as enjoyable as it is groundbreaking. And with the use of music to go along with its hyperactive imagery, you can see where Kubrick got some of his ideas for Clockwork.

The creativity is impressive and every moment bursts of it. Cinematography was awesome, the organ instrumentals and punk rock music set the playful yet rebellious tone perfectly, and the editing was coked-out insanity. Matsumoto set out to direct a film that would provoke conventions and be its own thing, and he undoubtedly succeeded. Pure energy and adrenaline in this one; there'll be images and sequences stuck in my head for sure. If you wish to experience something different, look no further to this type of counter-culture cinema and add Funeral Parade to your watchlist.

Beneath the flashy experimental surface lies an unorthodox story of 'Oedipus Rex' in the underground gay culture of Tokyo in the Sixties, the roles of the mother and father reversed. We follow a gay son as the world crumbles around him in his trials and tribulations of identity, sexuality, and self-expression. Desire and jealousy arise while deeply-rooted childhood trauma and buried secrets creep back onto the mind of the protagonist, leading up to the haunting incestuous revelation. It's simple but it's not. At the end of the day, you just have to see it for yourself.

Greatly enjoyed the performances of the real-life LGBTQ+ cast members, especially that of a young Pītā in the lead role as Eddie. Everyone was so into their roles and they felt real and alive as characters in a film.

This was a highly-anticipated film and though it was very good, I wish I liked this more. The main problem I had was the lack of a character to emotionally invest in. Also, I think the depiction of the LGBTQ+ characters were honest but won't age well. This was filmed in a different era so some things may not translate so nicely today, but if it's forever preserved in media serving as some time capsule to 1960s Tokyo like this, I don't have much qualms.

I can see myself enjoying this a lot more on a rewatch so I'm already taking note now. Boundary-pushing films aren't always that good, some I find obnoxious, but Funeral Parade of Roses is an exhilarating ride through a centuries-old tale told through visuals and sound so creative and wild that you just have to see it to believe it. Highly-recommended as a first plunge into this kind of filmmaking.
Thank you for reading and take care, everyone.