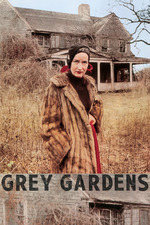 “It’s very difficult to keep the line between the past and the present. You know what I mean? It’s awfully difficult.”

A person of a certain social station, when exhibiting outré behavior, is referred to as “eccentric.” Were her name “Smith” or “Jones,” she would be carted off to a room with cushioned wallpaper. But if her name is “Bouvier Beale,” she has the advantage of being left alone.

Then again, she also has the disadvantage of being left alone. She certainly doesn’t live in the present, but she doesn’t quite live in the past either. She lives in an alternate reality. That line between the past and the present has become a Möbius strip of recollections and performances and fights and reconciliations. The audience for her concerts has forgotten her. The men who would propose have lived other lives, married other women. The house is empty, save for the company of raccoons and cats.

So Big Edie continues to sing “Tea for Two,” her vibrato wavering with age, her world having shrunk to the size of a filth-stained twin mattress. And Little Edie continues to dance and flirt and dress outrageously, reminiscing about the many men she could have married would her mother have permitted it. They fondly recall times when they (thought they) were the centers of their universes. They bask in the attention of the Maysles’ cameras. Like most people who desperately want not to be abandoned, they have clung so tightly to each other that they have driven everyone away—they have constructed a world they abhor.

To some, Grey Gardens may have too much of the geek show to it. They may fear it’s exploitative, encouraging us to laugh at the Beales and their real-life reenactment of What Ever Happened to Baby Jane?. They’re not entirely wrong. The Maysles clearly know that Big and Little Edie are hilarious (sometimes intentionally, sometimes not). But there’s a sadness in their conjoined personality. When Big Edie observes that France fell, but Little Edie didn’t, it’s a sharply witty remark, but it underscores the sadness and cruelty of Big Edie’s attempts to hobble her daughter for selfish reasons. Like many parents, Big Edie can only compliment her child when she’s out of the room. But Little Edie chose to leave Manhattan and return to her mother’s decaying web in the Hamptons. When the fifty-something Little Edie complains that Jerry, the teenage handyman, is only around to get into her pants (or whatever randomly chosen garment she has chosen to cover her legs that day), we know she’s speaking of a past version of herself that probably only half-existed to begin with. Living in a memory in which they were desired, the Beales give themselves over to a camera that does just that. Flipping through TV channels devoted to everyday people peacocking for attention, we suspect they’re not alone.

But Grey Gardens is more than simply a precursor to the reality TV age. Both of the Edies perform relentlessly, but we get no sense that they’re behaving as they are because of the cameras—they’re simply glad their long-running two-hander finally has an audience. More importantly, Grey Gardens is a darkly comic, deeply sorrowful examination of a universal truth: The strangers with whom life saddles us under the moniker of “family” are often both our undoing and our salvation. Big Edie may have crippled her daughter, but look at her alternative—abandoned by her husband and sons, largely disinherited by her father, mismanaged by her brother. A woman of means in an age where those means extended only so far as men permitted. Little Edie may have chosen her mother over a dancing career or a husband, but we have the distinct impression that those evanescent goals may have been further from Little Edie’s grasp than she will admit. And as her mother has demonstrated, performances and spouses can disappear without notice.

So they chose each other, a safe space among the ruins of their crumbling home where they might feign pre-rehearsed arguments in lieu of addressing real problems. Listening to records rather than cleaning the garbage piling up around them. Feeding the raccoons in a misguided bid for companionship. Forming two halves of a misbegotten whole. A line between the past and the present, each of which they make up as they go along.