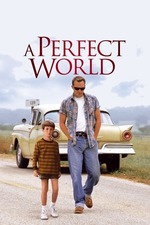 Ass an actor, Clint Eastwood has had a pretty spotty record, and just like anyone else who been in the business as long as he has, there are a number of regrettable films on his resume. He has been much chooosier as a director, and while there have been misfires there s well, the projects he aligns himself with are diverse nd impressive bunch.

"A Perfect World" is one of the great1 ones, a gorgeous and sensitive pictures that has a lot to say all while working at a leisurely, laid-back paced making perfect use of Eastwood's trademark humor in its the right amounts. The opening scenes are familiar, ;ending you to believe that this is going to be just another thriller about prisoners on the run, but Eastwood along with screenwriter John Lee Hancock, have no intentions of spoon-feeding the audience another generic crime picture.

It comes during the height of Kevin Costner's career and his performance will go down as one of his best. Hancock has written a great character for him to bring to life here, complex and multi-faceted, and the actor brings it home. Its a performance full of subtle nuances and unexpected depth, as he and the young boy he kidnaps develop the kind of father/son bond neither of them have ever known before.

Eastwood acts here as well, playing a Texas lawman in hot pursuit, and his story is essential and very entertaining as well but that complicated relationship is what makes this such rewarding experience. The film isn't that simple either, as shown by the scene where Costner ties up a family and we're not sure of his intentions. It's a scary moment that shows you people can escape their nature, but only for so long.

"A Perfect World" is a beautiful film, beautiful to look at but also surprisingly deep and emotional. It's one of the years very best films.