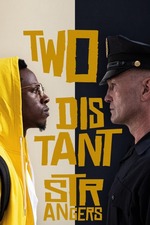 i kinda get the point; racism endless cycle, cops are gonna get you no matter what you do, the importance of perseverance etc. but at the same time, i don't get the point.

if this is supposed to instill some kinda hope in me it doesn't. carter doesn't even get out of this situation by the end of the movie, so who knows if he ever does.

he's not really the smartest character either. in most of these movies where they relive the same moment the whole point is that they learn something new each time and try something different and possibly get further each time. carter literally tries the same thing over and over again, and that thing is for some reason taking off his jacket and running as soon as he gets out of the building. when really what he should have done was fix the 9 on the door after that one time the cops mistook it for a 6. (and also on that note if the cop was waiting outside just standing why was he so quickly in riot gear breaking down the door? it seems like all it took was them making eggs which shouldn't take too long).

i've also got questions about the cop like he knows what he's doing obviously but is he seeking carter out or did he just also happen to get in this situation? when does his day reset?

this is a big miss to me. it really seems like this wasn't thought out too much, and honestly it seems very exploitative of all of the black people who have been lost to police brutality

edit: oh yeah almost forgot to mention how forced some of the dialogue feels so forced. there was a moment when there was like some really forced slang and perri says something like "if i have to kill a nigga" it literally sounded like she has never said that in her life.

edit 2: WHY DID THEY USE "THE WAY IT IS" AS THE CLOSING SONG? IT SOUNDS LIKE AN ACCEPTANCE OF POLICE BRUTALITY