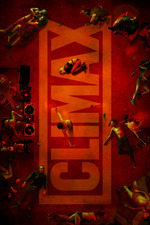 Climax had the opportunity to frame in its not-so-unique style the link between drugs and deeper desires by doing a psychological exploration on drugs, rather than poorly attempt to drag me into the hell it builds, which ends up being painfully pretentious and shallow.

I have seen movies that are nightmares. They don't have fantastic dance sequences, messages popping in the screen for no meaning at all, or cool lighting. Yet, they are so essentially focused on despair and a theme in general, that warn you effectively as they slowly drag you into a much closer hell. In them, agony is not just physical, but a mental disturbance that contrasts with the happiness promised in debauchery. This film is a mere display of technical development and most likely Gaspar Noé's definite style, rather than anything substantial or, as I have implied before, mental, which is intrinsically where fear awakens. Everything is so explicitly physical and gruesome for the sake of it —I can hear Noé saying 'That'll scare 'em!' as he directed— that all affection is lost. As a matter of fact, the last song in the film is an instrumental of Angie by The Rolling Stones, and it ends by showing a cliched 'the next morning', which made the entire thing laughable. I laughed at how its goddamn pretentiousness became a satire, ridiculous.