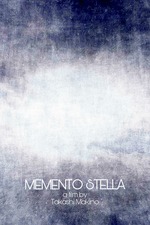 witnessing the cyclical creation and destruction of the universe through the eyes of god, looking in the mirror and seeing nothing in return; oh universe, i know your face / looks just like mine

it makes a great deal of sense in retrospect, but it wasn’t until somewhat recently that i came to understand just how fundamentally sad Makino’s project as an artist really is. in each of these films he searches for the impossible, making tangible the liminal space within consciousness that lies between life and death. with Memento Stella, Makino asks us to “never forget that we too reside among the stars,” which is to remind us we too are alone in the universe, searching, moving towards an endless act of becoming.

he has spoken in the past about having experienced the sensation of flying forward, forever, while comatose from a near-death accident as a child, and how his films are to some extent an attempt to replicate what he saw after dying—before coming back to life. no other work of his that i’ve seen realizes this aim better than this, where white light constantly shifts about the water as the image retreats further and further into cavernous void. and yet glimpses of beauty and warmth among the darkness suffice as reminders to endure and push forward towards the sublime. to push onward towards hope.