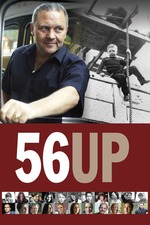 I have seen all of the Up movies so far. It is an interesting format. Each new movie is easy to fall into, not only because of the reminders within the movie of previous scenes, but also because these people become familiar. We do NOT know them! Each person remains a mystery. That is how it should be. Bless these people for their continued participation.

This time the quote that struck me most was from Peter, who has been missing from the previous 3 films. (He spoke of the harsh treatment he got from the public after decrying Thatcher. I just heard a trivia question that the 2nd top selling record after Thatcher died was Ding Dong the Witch is dead. So, come on - who was right on that?)

I can only paraphrase him: When you have children, you suddenly experience the time and attention your own parents gave you. I would say, or the lack thereof. He stated it much clearer.