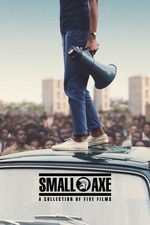 Steve McQueen’s latest film anthology is an experience one should watch this year, as it tackles the sensitive yet extremely relevant topics of racism, police brutality, segregation, classism and discrimination, in Small Axe, a five-part film series telling the stories of West Indian immigrants in London during the 60s, 70s, and 80s. Not only do these films show how unjust the system is to the minorities, it also make statements to demonstrate that, despite being oppressed for the entirety of their lives, they’re not going to stop until justice is served. The depiction of a person of color living in a predominantly white neighborhood is an extremely frightening to think of before and even today, and this anthology serves as a reminder that nothing truly has changed and our fight for equality has never been strong as ever.

The cinematography and the production and costume design really brought the vibes during the 60s to 80s, where both reggae and racism can be heard in the streets of London. But what made these films incredibly compelling is the powerful ensemble cast, especially that of Letitia Wright and John Boyega, giving a strong performance every week for the past five weeks. While already excellent on their own, all of the five films released gave a clear perspective on the struggles the Black people faced and their resilience to fight for their rights. Director Steve McQueen definitely delivered an impactful anthology like no other and I definitely recommend you to watch them all.