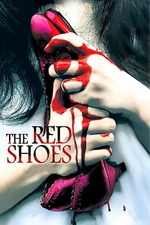 I told my brothers that this was Twin Peaks and they believed me, because I've been watching The Return and every time they walk in on an episode it's a completely different set of characters doing something unrelated that will never ever be connected with anything else and it never makes any sense. Anything that I'm watching at any given time is Twin Peaks now.

And it's very Twin Peaks of this movie to be called The Red Shoes when the shoes are clearly pink. If Google Translate is to be believed (...), then the Korean title actually refers to the shoes by their correct color, so all I can assume is that the English title exists to draw the connection to the Hans Christian Andersen story that very loosely inspired this film. I still must wonder why the situation could not have been resolved by the shoes in question being red from the outset, but I suppose we're well beyond these considerations now.

So the shoes are pink. Everything else is grey, and I love it. The rest of the movie is a dingy, putrid green-grey and a clammy, morbid blue-grey and a grainy, smoggy grey-grey and a dark, dark, grey-grey-grey. The colors are washed out within inches of their lives, and it's one of the reasons why I love East Asian horror movies from this era so much. The story itself is rather poorly paced and barely explained, and the premise of killer shoes (?) doesn't even interest me that much to begin with, but the fizzing, crackling score and slow, creeping tension make up for that. The final act is quite unorthodox, too - maybe not in a conventionally avant-garde way (I'll surrender myself to the authorities for that turn of phrase later), but The Red Shoes sinks to a deep, cavernous level of atmosphere where it just chills (in multiple ways) for the whole finale. Sure, I'll always appreciate a movie more if I can connect to the characters or get hooked into the story, but if all it can offer is this kind of mood and aesthetic, then that is still plenty for me.