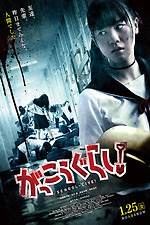 I was so dissatisfied with this film that halfway through writing this review I went to the Sentai Filmworks shop and ordered the Blu-ray of the 2015 anime adaptation. I guess that's a win for Gakkougurashi in the aggregate, but definitely a loss for me in that I could have just bought the anime without sitting through this.

We have here another victim of a loveless and underfunded attempt to squeeze a live-action film out of a manga/anime. I would struggle to name a single aspect of Gakkougurashi that did not suffer in the transition: the writing, directing, acting, effects, lighting, atmosphere, tone, characters, costume design, set design, horror, madness, setting, Megunee feels, and even the cuteness factor are all significantly better in the anime. The premise lends itself so much better to an episodic telling than a single-sitting amalgamation, and a huge number of individual plot elements simply vanish into thin air in this confused and aimless film; so much of this movie is empty space that can't be spun into gold by weirdly bloodless zombie movie cliches. It has been a good five years or so since I watched the anime, so I suppose I can no longer vouch for the exact degree of its quality, but it was certainly superior thanks to its individual storylines, hints at a larger story, and handling of Yuki's delusions; this film has no idea how to handle Yuki, and thus it just doesn't really bother to at all.

It's not that I'm fundamentally opposed to live-action versions of anime or manga. After all, how many anime out there were originally manga or novels or games, and in how many other combinations is that true? There is certainly a way to transition from one medium to another and gain something from it, and there are even examples of works jumping to live action and succeeding brilliantly. The real problem with so many of them isn't the inherent incompatibility of the format, but the lack of creative vision that accompanies them. School-Live! is emblematic of the conceptual wasteland that prompts adaptations to be churned out and spat into the gaping maw of an unsuspecting audience, apparently collecting so much obligatory lucre that it's considered a good idea to keep trying. In this particular case, as I said above, I happen to think that an episode-based format suits Gakkougurashi a lot better than a single film, but I'm not ruling out the possibility of this being done well - it just needs any amount of genuine thought and creativity. And Rie Takahashi.